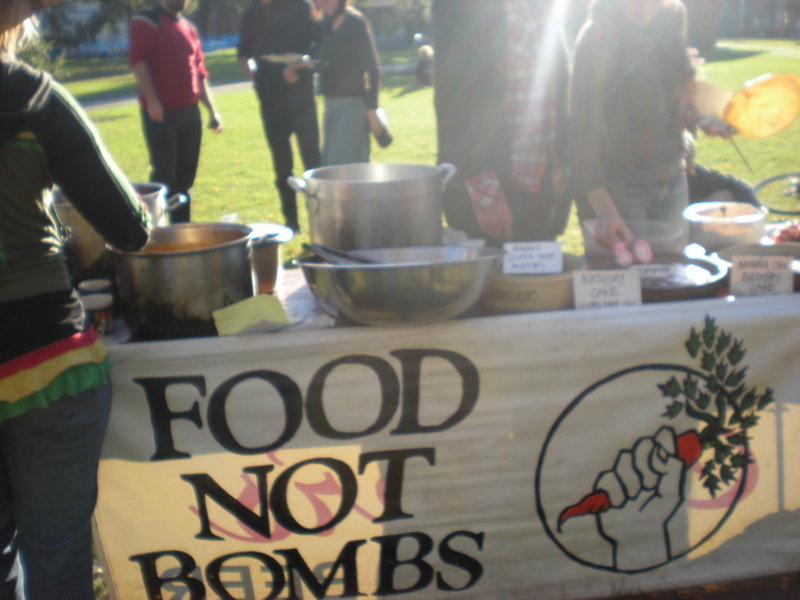 Food Not Bombs is a collective of people throughout the city that collect, cook and deliver vegan food to the streets, to protests, fundraisers and events. In Narrm/Birraranga people started organising Food Not Bombs in around 1996 and since then it has grown to 3 servings every week as well as special events catering. The regular weekly servings are held on the streets so that anyone who is hungry, homeless or in need of food can eat without restriction. It is important to FNB that everyone who wants to eat with us can, as well as to ensure there is no hierarchy or division between the people who cook and the people who eat. 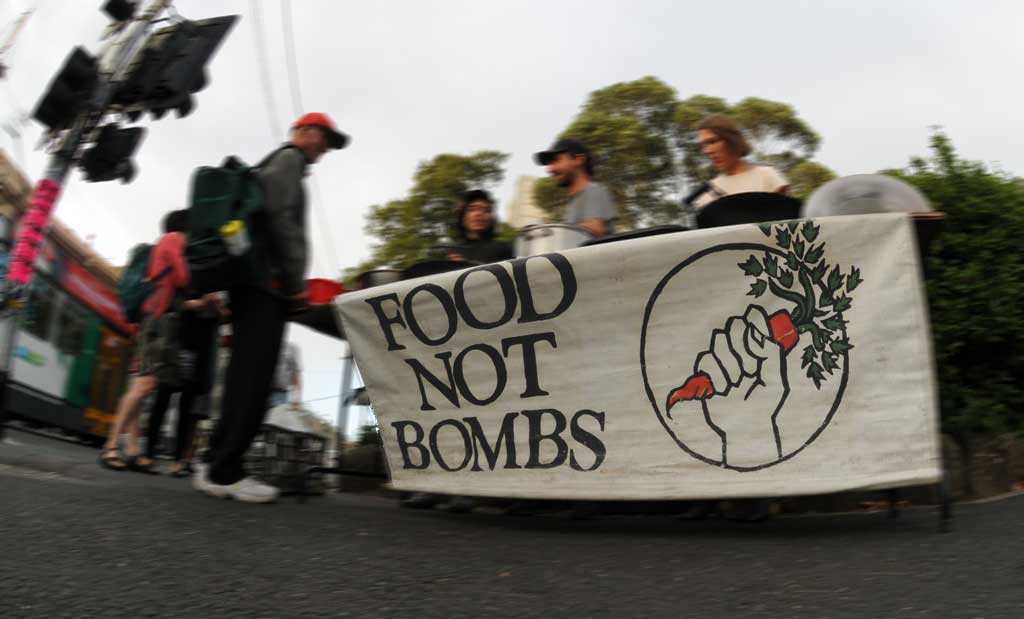 The food is all completely free to eat. Nearly all the food FNB cooks with is food that is donated or would otherwise be thrown away, or that sometimes has been thrown away already. FNBs pick up fruit and vegetables from the organic stalls at the markets and from other organic shops around the city. Any money that is needed, for example to pay for the running of the van that drives the food down to serving, is donated from either those who eat the food or from food not bombs fundraisers.

All of the people involved in FNB are volunteers and often take on different roles such as collecting the food, cooking it, driving the food to sharing, cleaning, Whoever is cooking on the day uses whatever food they have to cook the meals so there is no set menu or set recipes that are used. Anyone can use their creativity and flair to create their own vegan masterpieces.

How is this organised?

Food Not Bombs has no leader and is a very loose collective of people who are involved for their own reasons. Although Food Not Bombs does have an ideology, each individual is also autonomous and has their own politics. FNBs organisational ideas are based on those of collectivism, inclusiveness and consensus decision making where all people involved are given an equal voice. We are also politically motivated and support actions that aim for a world free of exploitation. Food Not Bombs supports social justice, human and animal rights and will often cater for events that are in line with radical social change.

Screening of Star Wars The Rise of Skywalker at the Waverley Cinema Pinewood Square Mount Waverley on Wednesday 8 January 2020 as a fund raiser for Food not Bombs Melbourne.
Book on line https://waverleycinema.com/E_008.php

hi all! instead of leaving comments contact us on fnbmelb@riseup.net

hi
i have some hot boxes, stackable hard plastic type, would you guys want any? they can be used for transporting hot or cold food
cheers
tess

Food Not Bombs recognises that we live and operate on the stolen and unceded lands of Wurundjeri and Boonwurrung people of the Kulin Nation. We pay our respects to Elders past, present and emerging here and everywhere we visit. We stand in solidarity with First Nations people and their struggle.